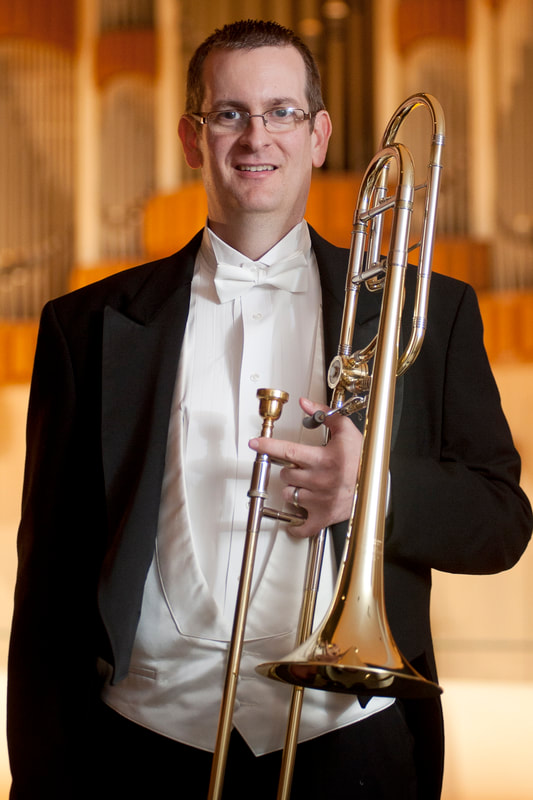 Dr. Jonathan Whitaker joined the faculty of the University of Alabama in the fall of 2009. At Alabama, Whitaker’s students have been tremendously successful in national and international solo competitions as well as being placed in some of the nation’s top summer music festivals. The University of Alabama Trombone Choir has given performances at the 2010 Eastern Trombone Workshop, the 2011 International Trombone Festival in Nashville, TNand the2013 International Trombone Festival in Columbus, GA. Whitaker has also appeared twice as a performer and clinician at the Eastern Trombone Workshop and two International Trombone Festivals. Whitaker is in great demand as a guest artist and has appearedat some of the most prestigious music schools in the country including The Juilliard School, New England Conservatory, Yale University, Indiana University and many more.As a soloist, Whitaker can be heard on numerous recordings including the 2018 release of his second solo recording entitled “Paceline” and his debut solo recording entitled “Nature’s Gift” with pianist Kevin Chance. He is a featured soloist on two recordings with the University of Alabama Wind Ensemble that include Anthony Barfield’s “Red Sky” and David Maslanka’s Concerto forTromboneand Wind Ensemble.These recordings are available at www.jonathanwhitaker.com.Whitaker has been very active in commissioning new works for the trombone. In 2016,he gave the world premiere of Nicola Ferro’s Megafor solo trombone and wind ensemble. In 2013, Whitaker gave the world premiere of Jim Stephenson’s Three Bones Concerto commissioned for the University of Alabama Wind Ensemble along with Joseph Alessi and Peter Ellefson. He also performed the work at the 2013 Eastern Trombone Workshop with the United States Army Band “The Pershing’s Own”,again with Alessi and Ellefson. He is also responsible for the commissioning of Eric Ewazen’s Visions of Light.In 2012, Whitaker made his Carnegie Hall debut as a soloist at the New York Wind Band Festival. He has appeared as a soloist with all of the wind groups at Indiana University, the Augustana College Symphonic Band, the Purdue University Symphony Orchestra, theHenderson State University Wind Ensemble and performed a premier performance of John Mackey’s Harvest: Concerto for Trombone with the University of Alabama Wind Ensemble in the fall of 2010.He also performed the American premier of Johan de Meij’s T-Bone Concerto with the Murray State University Symphonic Wind Ensemble.Whitaker has performed with the New York Philharmonic on three separate occasions includingthe orchestra’s 2012 Opening Gala that was broadcast on Live from Lincoln Center on PBS with music director Alan Gilbert. Whitaker is currently Principal Trombone of theTuscaloosa Symphony Orchestra. He performs regularly with the AlabamaSymphonyand has also held positions and performed with the Harrisburg Symphony (PA), Mobile Symphony (AL), ArkansasSymphony, Pine Bluff Symphony (AR), Shreveport Symphony (LA), South Arkansas Symphony, Duluth-Superior Symphony (MN), Owensboro Symphony (KY), Evansville Philharmonic (IN), Richmond Symphony (IN), Jackson Symphony (TN) and the Paducah Symphony (KY). Whitaker holds degrees in trombone performance from Murray State University and the University of Minnesota and the Doctor of Music degree in Brass Pedagogy at Indiana University. Dr. Whitaker’s primary teachers include Ray Conklin, Tom Ashworth,M. Dee Stewart, Peter Ellefson and Joseph Alessi with additional studies with Arnold Jacobs, Edward Kleinhammer, Michael Mulcahy, Charlie Vernon and Douglas Wright.Jonathan Whitaker is a Conn-Selmer clinician and performing artist.​ 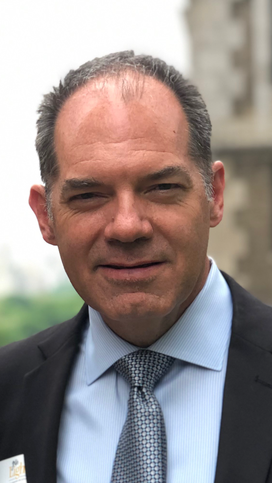 In addition to performing as a soloist with the Marine Band, he has been invited to perform as a soloist at the 2005 and 2007 Eastern Trombone Workshop in Washington DC, the 2013 International Trombone Festival in Columbus GA and has given recitals in Ostend Belgium, Fasano Italy, Panama City Panama and throughout the US in many of our nations prestigious universities and conservatories. Mr. Phillips recently performed a recital and was an invited clinician in August of 2014 at “Trombonanza!” - a weeklong internationally renowned trombone festival and workshop in Santa Fe Argentina.

As trombonist with the “President’s Own”, Mr. Phillips has gained extensive experience as a soloist. In the fall of 2000, Mr. Phillips was the soloist on the Marine Band’s fifty-two day national concert tour and has soloed numerous times with the Band at Wolf Trap Farm Park, Kennedy Center, and the National Mall. Mr. Phillips gave the world premiere of “Tarkus” by Scott McAllister, for trombone and orchestra with the Harrisburg Symphony Orchestra in May of 2007 and was an invited soloist at the prestigious Eastern Trombone Workshop performing “Tarkus” with the US Army Band in 2008. Mr. Phillips premiered “Tarkus” in Brussels and Ostend Belgium with the Belgium Radio Orchestra in 2009. The work received rave reviews and was featured in a recent New York Times article on trombone soloists and commissions along with works by Scott McAllister, Christian Lindberg, Melinda Wagner and Christopher Rouse.

Mr Phillips has released two solo CDs on the Potenza Music label titled "Stepping Stones for Trombone" Volumes 1 and 2. “Stepping Stones for Trombone” is now available at www.justforbrass.com He has also released and two chamber music CDs on the Albany Records label with Stentorian Consort. “Myths and Legends” features all premiere recordings by Stentorian Consort containing exclusive first recordings by Fisher Tull, Eric Ewazen, Charles Wourinen, Leslie Bassett and others. The Stentorian Consort’s second CD – “Diversions” is a highly acclaimed collaboration with Joseph Alessi (New York Philharmonic) and also features newly commissioned works for the trombone quartet and soloist.  He can also be heard performing all of the trombone tracks on the Discovery Channel’s “Shark Week” and the Animal Planet’s “O’Shea’s Big Adventure.”

Mr. Phillips has been a featured artist at the Alessi Seminars in 2005, 2007 and in Italy in 2010 and remains active as a soloist and clinician around the country. Most recently, Mr. Phillips was a semi-finalist for the assistant principal trombone position with the New York Philharmonic. During a relatively short full-time teaching tenure at Baylor, Mr. Phillips’ students have been selected as finalist and winners of national and international solo competitions, quartet competitions and are performing in full time professional orchestras or teaching at major universities.

Mr. Phillips grew up in Houston Texas and attended Westfield High School under Director of Bands, Philip Geiger.  His primary teachers were members of the Houston Symphony and the Houston Grand Opera and included Jim Pedigo, David Waters and David Kirk.  He also studied briefly with Alan Barnhill and John McCroskey of the Houston Symphony as well as Per Brevig of the New York Metropolitan Opera and John Kitzman of the Dallas Symphony Orchestra.  Mr. Phillips received both his Bachelor of Music and Master of Music degree in trombone performance from the Shepherd School of Music at Rice University. In Partnership with Voice of Wilderness

​The primary goal of Voice of Wilderness is to communicate the reality of Jesus Christ and the practical application of the teachings found in the books of the Bible. In a complex society such as ours, man has virtually ignored this vital part of an educational process. We use the wilderness setting as a tool to relate Biblical principles to the everyday needs of the individual. God used the wilderness to deal with His people; Moses, Elijah, David, John the Baptist, and Jesus were all led into the solitude of their natural environments to reflect and develop.
Where life is basic, man is more likely to realize his need for dependence on his Creator. Here, an individual can see God's creation and understand more of His power. Free from day to day distractions, one can clearly examine the life Christ claimed to give.

Mission - An exclusive chamber music festival located in Pagosa Springs CO featuring musicians of the highest caliber. Based at the Mountain Light Lodge, this week long festival of chamber music seeks to inspire and engage audiences in Pagosa Springs CO. Students will discover their true musical identity and find purpose in their creative pursuits while working alongside world class faculty.
Vision - This is the fifth year of the Mountain Light Music Festival. The festival was featured as a trombone summit in 2015 with students and faculty from SMU, Rice, University of Houston, Houston Grand Opera and Baylor. The Baylor Brass was in residency in 2017 and 2018 and performed concerts for the Cade Mountain Community at the Mountain Light Lodge and performed to a sold out audience at the Wyndham Resort, Pagosa Lakes Property Owners Association Club House and Community United Methodist Church. We are grateful to our sponsors: Pagosa Springs Sun, Choke Cherry Tree, Click Printing, Three Chicks and a Hippy, Voice of Wilderness, Bookends, Pagosa Springs Area Chamber, and Airport Self-Storage. We are looking for long-term underwriters to help this festival continue its growth and bring other instrumental genres to Pagosa.