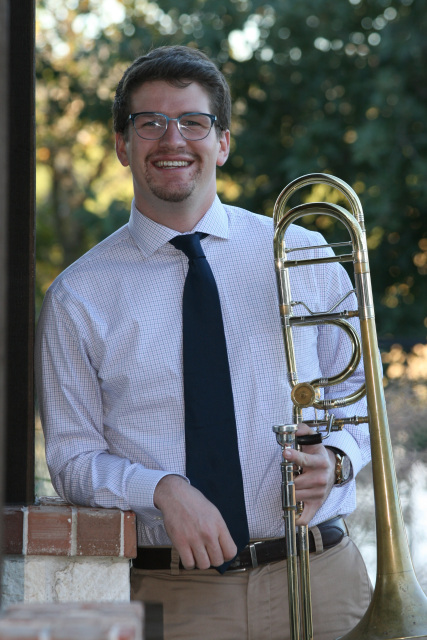 Steven Vogel is a Houston based trombonist and low brass instructor who is in high demand as both a performer and educator. Noted for his versatility of style and energy in performance, he has performed in solo and chamber music capacities throughout the United States in the past several years.

A Texas native, Steven completed his undergraduate education in Trombone Performance with Dr. Martin McCain at Texas State University and received his Master of Music degree from the University of Texas while studying with Dr. Nathaniel Brickens. Steven currently holds the position of Adjunct Professor of Trombone and Euphonium at Texas Lutheran University and has also served on the faculty of the prestigious Luzerne Music Center. Steven has enjoyed working for The Boston University Tanglewood Institute in previous years, continues to teach a highly competitive private low brass studio in the greater Houston area, and is highly sought after as a guest clinician and masterclass instructor.

As a performer, Steven currently serves as the Principal Trombone of The Woodlands Symphony Orchestra, as well as the Second Trombone of the Brazos Valley Symphony Orchestra, and has appeared as a substitute trombonist with the Round Rock Symphony, Laredo Philharmonic Orchestra, Houston Sinfonietta, and other orchestras throughout the state. He is a regular performer with both the Texas Brass Ensemble and the Hill Country Brass Quintet, and frequently performs as a freelance player throughout the state of Texas. Steven has been a finalist for the ITF Larry Weihe Trombone Competition, as well as the winner of the 2017 Big 12 Trombone Conference Tenor Trombone Competition.

When not teaching or performing, Steven enjoys running, cooking, and spending time with his family. An avid outdoorsmen, he enjoys camping, hiking, fishing, and going for long walks with his dog, Tucker.