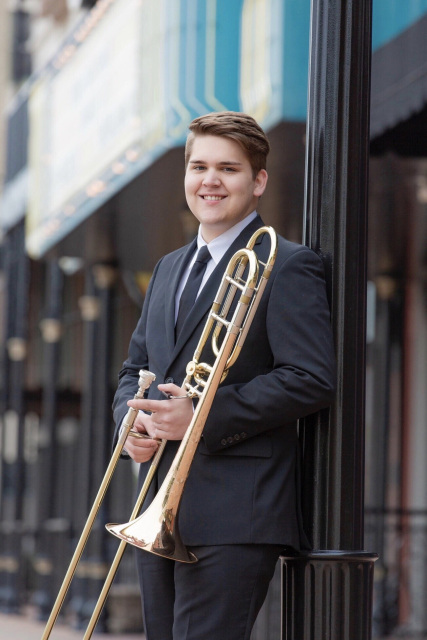 Camden Brown is a sophomore music performance major from Bridge City, Texas. He is an active member of the Baylor’s Symphonic Band, Jazz Ensemble, and Trombone Choir, but has also performed with numerous orchestras, church worship bands, and various chamber ensembles.

While in high school, Camden won multiple TSSEC Outstanding Performer Awards and performed with four TMEA All-State ensembles. He was named the winner of the Symphony of Southeast Texas Concerto Competition and first alternate in the 2018 TCU Trombone Summit High School Solo Competition. In 2019, Camden was named a finalist in the American Trombone Workshop’s National Tenor Trombone Solo Division 1 Competition, and traveled to Washington D.C. to compete at the workshop.

Camden enjoys listening to and performing every genre of music, but he is especially passionate about orchestral music and jazz. He hopes to one day win a major performance job and/or teach trombone at a collegiate level.